Little House On The Prairie:Season 8 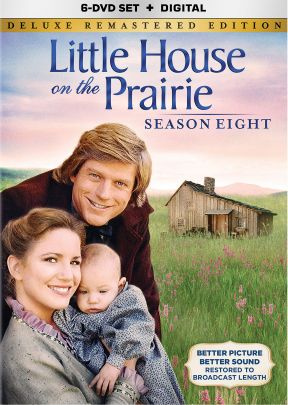 This collection presents the entire eighth season of Little House on the Prairie. The complete 8th Season 1981-1982

Nellie and Percival must move to New York and the Olsen's adopt Nancy. -- Dr. Ledoux moves to Walnut Grove and proves, beyond a doubt that he deserves the community's respect. -- Charles and Nels become concerned when the children of the town are influenced by a daredevil to attempt dangerous stunts. -- Mr. Edwards loses his son and enlists the aid of Charles to investigate the real circumstances behind his death. -- The Ingalls and the Wilders share cherished memories when they are snowed in on Christmas. -- Charles and Caroline risk losing James and Cassandra when an uncle files for custody of the children. -- Laura and Almonzo's budding marriage faces serious difficulties following Almonzo's terrible stroke. -- When James is shot and lapses into a coma, Charles turns to his faith in order to save his adopted son.