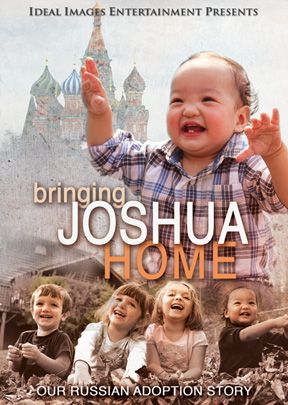 Bringing Joshua Home tells the personal story of one family who successfully adopted a Russian child. Arthur and Hanna Rasco share the challenges, joys, and drama of adopting their baby boy from Moscow and introducing him into their family. If you've ever wondered what it is like to adopt internationally, this film gives an inside, real-life look into the process from start to finish.

In late December, 2012, Russian President Vladimir Putin signed a bill banning all American adoptions of Russian children. Americans have adopted hundreds of children from Russia each year, providing hope and love to those languishing in Russia's overstressed orphanage system. Protests against this new law have erupted in both the United States and Russia. How this controversy will be resolved remains to be seen. What can be seen is the power of life-giving love exhibited by those who have successfully adopted in the past. Bringing Joshua Home tells the personal story of one family who successfully adopted a Russian child. Arthur and Hanna Rasco share the challenges, joys, and drama of adopting their baby boy from Moscow and introducing him into their family. If you've ever wondered what it is like to adopt internationally, this film gives an inside, real-life look into the process from start to finish. Widescreen.

Bonus Features include:
-International Adoption Tips: Vital information and tips on the process of adoption
-Another Adoption Story: See how faith and commitment keep one family strong in the face of adversity as they adopt from China.

This story is about changing the world for 1 little boy…Joshua! This family has done their part in becoming an solution to the problem. We pray this catches on for all children everywhere to be adopted into God fearing, loving families!

I LOVED the picture of organization of the mom when getting ready to leave for yet another trip to Russia. If you don’t pay attention you might miss it. It takes place while they are giving instructions to the grandfather.

My nephew is in the process of adopting a child named Alex from the Ukraine. The rules there haven’t changed thankfully. I can’t wait to meet the 2 newest additions to their family…they recently had a baby boy named Artemis as well.

I believe if you are considering adopting outside the US, this would be a great video to watch.

This short documentary looks at the lengthy and costly process of adopting a Russian orphan—a complex business, especially if the prospective parents happen to be American. The subject of Bringing Joshua Home is North Carolina couple Arthur and Hanna Rasco's adoption of baby Joshua from a Moscow orphanage, which occurred before Russian president Vladimir Putin signed into law a bill banning U.S. adoptions of his country's children in December 2012. Made by the Rascos, the film chronicles the numerous obstacles to gaining legal custody of Joshua, which required multiple trips to Russia at the couple's expense. Viewers witness that drawn-out process here step-by-step, as scenes build suspense about the ultimate outcome while also capturing the Rascos' drive and love. Even if adopting Russian children is currently no longer an option for Americans, this heartwarming documentary could inspire some to look to other nations where youngsters without families hope to find a real home. Highly recommended.

This documentary is an excellent picture of international adoption. The Rasco's have created a wonderful tool for all families in any part of the adoption journey complete with helpful hints concerning choosing an agency, raising funds and applying for grants. Their personal story is laid out in a very real, relatable, and encouraging way. I highly recommend this video!

The Rasco family's adoption story is a beautiful picture of a pursuing family who will go to great lengths to bring home their son and brother. It's a story of sacrifice and redemption, of hope and love. Whether you are a family already personally acquainted with adoption or one that is testing the waters of adoption for yourself, you will enjoy the beauty and emotion of Bringing Joshua Home.

This was such a beautiful film, the parents really opened up to share what that personal experience must have been like. Film was really well done and what a poignant time to hear this story!

I have watched the "Bringing Joshua Home" video more than once. I am amazed how the Rasco parents persevered through all the paperwork and complications to make a home for a baby who didn't have one. In this process it was encouraging to me to see how our church came together to support and help the Rascos raise more money to defray the adoption costs. It's wonderful to see how God works everything out so perfectly.In the past year or so I've enjoyed seeing Joshua grow up in a loving, and happy home with caring Godly parents.

This film is ideal for any family beginning the journey of international adoption. Arthur and Hanna's transparency during their adoption depicts the often shocking reality that this process is not without serious challenges. However, the film does more than merely inform, it inspires you to consider how you can change the world for a boy like Joshua. This film answers many questions an adoptive family may have, but it also touches intangible areas of the heart by answering the most important question is it worth all this? After seeing this film, you will be ready to answer that question with a resounding YES!

As a family who has often thought of adoption, we found this film informative, encouraging and inspiring. What a beautiful story, and what an amazing picture of love and perseverance. This film reminds me of the Gospel, and how God pursues us and loves us, even when we didn't realize He was, and before we even knew Him. Before Joshua knew his parents, they were lovingly pursuing him, and loving him! What a great portrayal of Christ's love for His children! 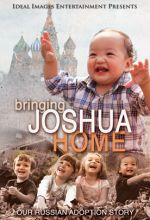 Bringing Joshua Home tells the personal story of one family who successfully adopted a Russian child. Arthur and Hanna Rasco share the challenges, joys, and drama of adopting their baby boy from Moscow and introducing him into their family. If you've ever wondered what it is like to adopt internationally, this film gives an inside, real-life look into the process from start to finish.