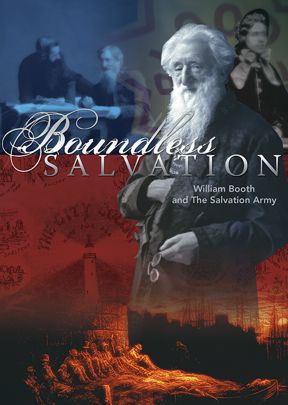 This four-part documentary explores the history of The Salvation Army. Host John Cleary traces the path of this powerful movement from its origins to the present day.

This four-part documentary explores the history of The Salvation Army. Host John Cleary traces the path of this powerful movement from its origins to the present day. Learn how The Salvation Army became a force for both gospel evangelism and social change. Meet the movement's founders, William and Catherine Booth, and examine the innovative structures they introduced to meet the challenges of the 19th century. We'll also see how The Salvation Army has continued its work into the 21st century. Widescreen.

Some people today might know the Salvation Army only from its Christmas Santas collecting contributions in their red kettles, or perhaps from watching Frank Loesser's 1955 classic Guys and Dolls. Although the Salvation Army's public profile has diminished, the organization has a fascinating early history, which writer-narrator John Cleary skillfully covers in this four-part series. The title is drawn from a song written by William Booth, the Methodist minister who first conceived of the Army during his service in London's impoverished East End in 1865, where he and his wife Catherine turned the idea of a Christian "soldiery" ministering to society's outcasts into a reality. Since the documentary was produced by the Army's Australia Southern Territory, it understandably empathizes the group's early work Down Under, but Cleary also covers the Army's efforts elsewhere, adeptly tying the Army to the cultural currents of the time, drawing connections to cinema and popular music at each stage while also employing archival material, graphics, and sound recreations to excellent effect. The final two episodes focus on whether the organization has lately slighted its "dynamic mission" of social service to become a "settled church" catering to its present membership. But while the second half is more about invigorating the organization, the first half serves up a fine historical survey that will have wider appeal. Recommended.