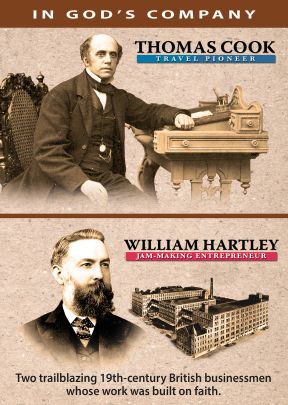 Thomas Cook — There is no name in the world more instantly recognizable in connection with travel than Thomas Cook. A devout Christian, his great passion was to bring people closer together and nearer to their Creator by making “God’s earth with all its fullness and beauty” accessible and affordable to all. Renowned British Prime Minister William Gladstone ranked him among the nation’s great public benefactors. This documentary tells the remarkable story of how Thomas Cook progressed from his early years of pain and struggle to becoming a household name across the globe. 40 minutes

William Hartley — ﻿Today William Hartley would be applauded for establishing a brand of jam that made him immensely wealthy, yet his aim was not material success but to “serve the Lord every day to the best of my ability.” His business practice reflected his faith, earning him an outstanding reputation for integrity, quality and customer care. Even during the horror years of World War I he maintained the highest standards. A man of great compassion, he used his immense wealth to enrich the lives of others. This documentary tells his inspiring story. 35 minutes

The 178-year-old international travel firm that bears Thomas Cook’s name collapsed in September 2019 (stranding thousands of clients around the world). But that shocking event happened after the making of this inspirational two-part documentary from filmmaker Gary Wilkinson celebrating the lives of Cook and philanthropist William Hartley. Born into hard circumstances in Derbyshire, England, in 1808, young Cook worked during his childhood in a local market, and later as an apprentice cabinet-maker. A Baptist, Cook became a missionary in his late teens, acting as a traveling evangelist to regional villages. Taking a temperance pledge, he actively denounced liquor. But it was his association with the temperance movement that led to Cook’s decision to start an excursion service, organizing railway trips for fellow Temperance Society members, who paid a shilling apiece. In time, the formidable company Thomas Cook & Son was born, and while profits were very good, Cook’s spiritual life played a large part in his ambitions. Sir William Pickles Hartley similarly married great success to strong religious and philanthropic principles. Born in Lancashire in 1846, Hartley belonged to a long line of family grocers. When a supplier of jam failed to make a delivery, Hartley created his own, which quickly attained massive popularity. A man of great wealth, he was also a member of the Primitive Methodist church, endowing it with funds to build chapels and realize other projects. Hartley was also a smart and generous employer, paying women working in his factories more than other companies paid their female staff. Proving that progressive policies could reap dividends, Hartley also covered tuition costs for employees who wanted to advance in his jam business. In God’s Company tells the inspiring story of two men whose faith-driven worldview illustrated that capitalism doesn’t have to be about complete self-interest. Recommended. Aud: P. (T. Keogh)