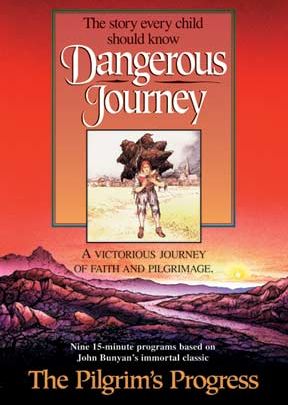 Dangerous Journey is that beautifully illustrated adventure story that shows children the basic themes of the Christian life and pilgrimage.

Every child should be introduced to Bunyan's classic — The Pilgrim's Progress.

Dangerous Journey is that beautifully illustrated adventure story that shows children the basic themes of the Christian life and pilgrimage. The colorful characters and gripping situations make a vital and lasting impression. Use at home and in Bible school, children’s church, and Sunday school classes. Includes leader's guide/Scripture reference guide.

Recommended for ages 8 and up. Fullscreen.

The Pilgrim's Progress by John Bunyan became history's all-time best seller next to the Bible itself. Now we can be blessed by the story through this film version, based on Bunyan's classic. Although especially suited for children ages six and older, the recording can also be enjoyable and effective for adults. Both the graphics and narration are excellent. The 135-minute recording is divided into nine 15-minute segments, enabling the user to either view the whole story at once or use shorter sections as a series over a period of time, such as in a class setting. The recording comes with a leader's guide for parents and teachers and tells about John Bunyan and The Pilgrim's Progress. Then it summarizes each of the nine sections individually, with information on the main characters and major settings. Each section also includes a Scripture guide and a discussion guide. A hardback 126-page full-color storybook is also available from Vision Video.

Dangerous Journey is an adaptation of John Bunyan's 17th-century classic The Pilgrim's Progress in an illustrated format designed for the religious education of youthful audiences. Told as a dream, it relates the story of Christian, who abandons home and family to flee from sin and destruction and travel the straight and narrow to the Celestial City. Along the way he encounters allegorical figures such as Faithful, Evangelist, and Hopeful, as well as Ignorance, the giant Despair, and the monster Apollyon, as he confronts a series of hardships and tests before arriving at his destination. Divided into nine segments (with recaps and previews, allowing for group discussion), Dangerous Journey nicely captures Bunyan's extremely visual writing style, with Alan Parry's enchanting illustrations backed by Paul Copley's beautiful narration, bringing fresh appeal to a classic that is admittedly difficult for modern audiences. Despite the caveat on the DVD jacket that the content might not be appropriate for very young children, I would advise parental discretion for those under 10, due to vivid portrayals of hellfire and grisly death that might no be palatable to all Christians (though kids who play video games such as Doom are likely to consider this pretty tame). As a seminal work of English literature, this is actually more appropriate for general collections, than for young people's religious studies. Highly recommended.

Dangerous Journey is based on John Bunyan's 1676 classic, The Pilgrim's Progress, an allegory of the Christian's road to heaven. The story is divided into nine 15-minute segments taken from the main event in the original book. The video is animated with watercolor and ink paintings, and set in pastoral 1600 England with the characters in period dress. A male narrator varies his voice for each character, and dramatic symphonic music fills the background. This introduction to the basic themes of the Christian life and pilgrimage for young children is suitable for church and Sunday school classes as well as for home use.

We used this DVD as a movie night for nine different sessions in our Awana Club! The girls loved the movie and the discussions. I was unsure in the beginning but they seemed to be just as captivated by the narrator and the animation of the story. Were able to use their imaginations further and really get into the journey that Christian made to the Celestial City.

My boys, ages six and eight truly love this book and they loved watching the video too. I read one chapter a day and they always plead with me to read the next chapter. But I don't because it keeps them interested for the next day. We use the study guide but I don't read the overview to them. To me that would tell most of the story before I read it. At first the content and pictures may seem scary, and to a degree they are, but my children experience the relief when a good man guides Christian or when Evangelist shows up. And that is the difference I want them to recognize. One of the best books and video we own.

All six of my children really enjoy this movie and the book. Even my 5 year old will ask me to read the book to him over again. Blessings, Linda www.homeschooling6.com

I watched this video several years ago, when I was quite depressed and had considered suicide. After encountering the part of the video where Christian escaped from Doubting Castle, after battling against suicide himself, at the Giant's suggestion, I realized where those thoughts were coming from in me. I too had a key of promise that released from my dungeon as certainly as it did Christian and Hopeful. I watch it every six months or so (more often when things are going ill with me) to keep me on the high road to Zion. Thanks for publishing such a life saver as Dangerous Journey.

This is the best film of Pilgrim's Progress that I have ever seen. Though it's not animated the detail of the art and expertise of the camera throughout the filming render it breathtaking. I grew up with it and it captivates young and old alike. We liked it better than the animated one! Now I am getting it for my kids. I would give it 5 stars no questions. 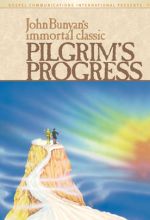 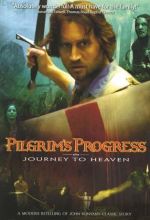