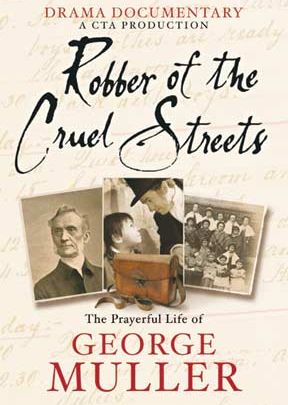 George Müller (1805-1898) was a German playboy who found Christ and gave his life to serve Christ unreservedly. His mission was to rescue orphans from the wretched street life that enslaved so many children in England during the time of Charles Dickens and Oliver Twist. Müller did rescue, care for, feed, and educate such children by the thousands. The costs were enormous for such a great work. Yet, amazingly, he never asked anyone for money. Instead he prayed, and his children never missed a meal.

This docu-drama presents his life story and shows how God answered prayer and met their needs. It is a story that raises foundational questions regarding faith and finances. Also included are two special documentaries on Müller and some of the lives affected by his work. Widescreen.

Many believers are familiar with the life story of this man of faith, George Muller (often spelled Mueller). Here is an effective docudrama of Muller's life that should challenge us believers to walk by simple trust in God each day for our spiritual and material needs. Children and teens would particularly benefit from this production as they consider the claims of Christ upon their lives. The video presents a powerful testimony of what God can do through a person who lets God have His Way.

Money controls lives. People buy things they want and need with it, measure how much they have against how much money others have, and worry about having too little. Even Christians worry about money. Pastors wonder if they will have enough money to complete their church’s building projects or finance their programs. George Muller didn’t. This docudrama gives a glimpse into the life of this extraordinary man. Born in Prussia, Muller was a liar and thief until he met Christ. From then on, he dedicated his life to serving the street children of Bristol, England. But the most amazing thing about his life is that he trusted God for everything, and God always provided. If found this DVD both informative and interesting, but there were some minor issues with production value that may affect a view’s opinion of it. The acting is not done by experienced professionals, and the dialogue seems stilted at times. A few other areas, such as uneven music and single camera filming, showed the film to be low budget. In general, however, I liked the movie and found that its message far outweighed its problems.

This program chronicles the life of Christian evangelist George Muller who was born in Germany in 1805 and as a young man lived a life of sin and debauchery. Hoping to turn his life around, his father sent him to the university to study divinity. At a prayer meeting, he found fulfillment in God. Muller believed that his mission was to rescue orphans from the streets of Bristol, England, by providing free housing and education. Without pleas for public support and with no government funding, he eventually provided accommodations for thousands of orphaned children. The program alternates between dramatizations and documentary footage with a male narrator visiting various historic sites. The film is a bit disjointed and difficult to follow at times due to shifts between time periods. Of additional concern is a statement that the end of the slave trade meant the loss of one of Bristol’s main sources of income, giving the impression that the abolition of the slave trade had a negative impact. However, the film does provide an accurate portrayal of the life of this man of God and impresses upon viewers the power of prayer and the trials and tribulations of a life of faith. An additional purchase for Christian school libraries and public libraries with a need for Christian materials.

It was the best of times (for George Muller) and the worst of times (for orphans) in early 19th-century England, where the lucky ones were the street kids who survived by begging or stealing, while the less fortunate were confined to workhouses (as immortalized by Charles Dickens). Presented by Russell Boulter, this docudrama follows the course of George Muller’s (1805-1898) progress from playboy to Christian convert, who “robbed the cruel streets of thousands of victims, the gaols of thousands of felons, and the workhouses of thousands of helpless waifs” by founding a series of homes where children were cared for and educated. This was a lifelong work and Muller (played by Adam Stone as a young man, and later by Andy Harrison) became an international speaker of note, traveling to 42 countries, including the United States, although he never asked for financial support, relying solely on prayer (and the kindness of unsolicited contributions) to meet the children’s needs. His work continues to this day through the Scriptural Knowledge Institution which distributes scriptures, supports mission work, and runs schools for children of the poor (like Muller himself, the SKI’s work continues to be based on prayer, faith, and trust in God). Featuring beautiful on-location cinematography and lovely background music, this is an absorbing and inspirational biographical profile. DVD extras include a bonus half-hour program on the life and legacy of Muller. Highly recommended.

This drama documentary tells the incredible story of George Muller, a prodigal son transformed by the love of God. Though his name may not be familiar, in the 19th century his work was heralded worldwide. Through God's direction and provision – and a vow to make needs known only to God – he established orphanages in Bristol, England, for street children, where thousands not only found refuge but were also well prepared for life as adults. Charles Dickens made an unannounced visit to an "orphan house" and left so impressed that he wrote it up in the papers. Initially I was distracted by the somewhat intrusive narrator and other petty production details, but they were well offset by present-day scenes of the locales (often coupled with historic photos), engaging actors, and most of all, the amazing story of this man’s exemplary compassion, humility, and giant-sized faith.

If Protestants had saints, George Muller would be one of them. Born in 1805 in Prussia, he immigrated to England as a young Christian and in 1843 began a life of faith and works that centered on helping the orphaned street children of Bristol, England. Most of his work was funded without fanfare, Literature solicitation, fundraising sermons, or even prayer requests. Over 120,000 orphans went through the institutions he founded. It is estimated that he raised the equivalent of $180 million dollars (current value) without using any fund raising techniques. His only method was prayer. Converted as a young man from a life of gambling, drinking, and womanizing - Muller was influenced by the pietistic work of Augustus Franke and the Pietist movement at Halle University in Germany. In England, Muller encountered a semi-denominational reformation movement going on with men like Anthony Norris Groves and Henry Craik - two men among the Plymouth Brethren. (Oddly enough, only Craik's early Baptist connection is mentioned; while the Christian Assembly work of Groves, Craik and Muller himself ignored.) As Mueller aged, he began a worldwide outreach. Traveling to Canada and the United States, he later met with the American President Rutherford Hayes. He spent 17 years traveling to over 42 countries, logging in over 200,000 miles. He died in 1898. His influence as a man of faith and charity are unparalleled. He lived by prayer and faith in the Son of God. The video is generally well filmed, with a number of 19th century melodramatic scenes, which could have used editing or deleting. The acting is stuffy. Nevertheless, the video functions well with its back and forth traditional documentary structure coupled with dramatic reenactments. Two men play Muller at different stages in his life. The main laws of Muller's life: First, living absolutely by faith; and second, telling no one but God about physical and financial needs - seem pious; but reflect a super-spirituality that no one, not even Muller, could ultimately live up to. Later in life, Muller began to make the needs of his orphans known to outsiders. This video is not designed with academic critical apparatus to balance the hero worship prone to Christian media. Rather, the film is designed to let us see how Christ can use one Christian wholly devoted to himself to do great things. - Reviewed by James L. Sauer, Director of Library, Eastern University, St. Davids, PA

I have just received the DVD/Book set, "Robber of the Cruel Streets-The Prayerful Life of George Muller" Drama Documentary by Crawford Telfer, presented by Russel Boulter. From what I've seen, this happens to be one of the BEST personal story documentary that I've ever seen. The story was presented in an informative, logical, educational, and captivating manner. You couldn't help but keep watching the story. Even James Cameron could learn HOW to put a decent FACTUAL educational documentary together by watching this DVD!!!

THE VERY BEST DOCUMENTARY I HAVE EVER SEEN. SO WELL DONE AND faith BUILDING I HAVE WATCHED THREE OF FOUR TIMES... Wish every Christian could view and be blessed. God the same yesterday today and forever. Would like to see Hudson Taylor's life done at this quality level ....A spirit of Excellence here. THANK YOU!! God bless you. Dorian Ellsworth

I am literally crying right now and praying to God as I'm ashamed for everyday that I have doubted had anxiety fear worry financial stress etc. God does provide and we need to continually trust him. I just want to buy this dvd so bad that I can share this testimony of God's faith trust love and miracles do exist today and forever I want to share this with all the people I know. Thank you SHINE TV love the work you doing!!

Yes the intensity the atmosphere the facts the movie shows them all well. Seems like no one is disappointed in this movie.

Sylvia - Robber of the Streets

This is the MOST AMAZING film for anyone to see, especially people who don't really believe or think much about God. It is a wonderful, uplifting film and hopefully, it will awaken the conscience of many people. 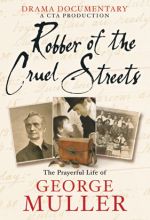 Robber of the Cruel Streets - The Story of George Muller - .MP4 Digital Download