Last Appeal: The Life of Faustina 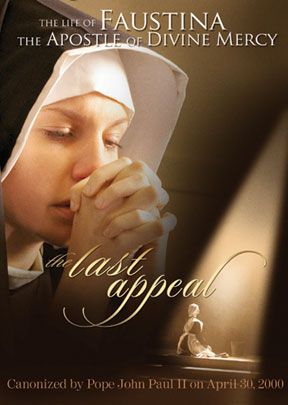 ﻿The Last Appeal portrays the story of a peasant girl chosen to bring the message of Mercy to mankind in preparation for The Last Day — The Day of Judgment. The drama unfolds through the revelations and visions of God to Helen Kowalska. The story of Helen vividly brings to light the struggles she went through in the process of delivering the message through the humble life of a nun in a convent in Poland at the beginning of the 20th century.

Andrea Syglowski, a young artist of Polish origin has brought Sr. Faustina Kowalska to life again on screen with her astounding performance. Caitlin Moreland plays the role of Sr. Mary to everyone’s delight with her honest, down-to-earth and impeccable character.

The Last Appeal is a compelling message of Divine Mercy for our time that has already touched millions of souls and continues to do so in the Third Millennium bringing hope and spreading love to many. The great legendary of our times, Pope John Paul II, has canonized her as the saint of the new millennium on April 30th, 2000.

Written, produced and directed by Bala Udumala M.F.A. In black and white. Widescreen.

I have seen this short movie on St Faustina. It's taken well. Need more of such kind of movies. The background of Poland was shown well. It is a great piece of work.

Bought this DVD knowing it would be short just over 1/2 hour unlike many of the other excellent Catholic films that are sold by Vision Video. Upon watching it we were severely disappointed and seriously considered asking for our money back! The acting was appalling, American accents don't help here I'm afraid, and the vision of Jesus was laughable! So much more could have been done, with both the life of Sr. Faustina, and the messages of Divine Mercy which is sorely needed for our times. I don't normally write reviews, I have seen many catholic films of various generally good quality, and fell that this is so poor that it's not worth even the 12 or so....God bless. R