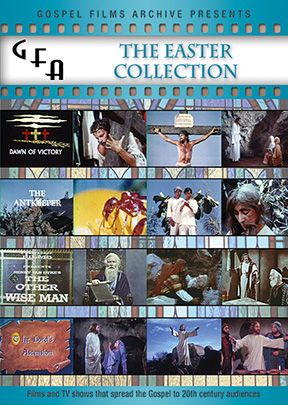 Gospel Films Archive proudly presents a festival of four rare classic short films that celebrate the spirit of Easter as manifested by Christ's Crucifixion and Resurrection.

Dawn of Victory 1966 - Concordia Films / 29m — Nicodemus and Joseph of Arimathea witness the prophesies of Isaiah come to pass during this dramatization of Christ’s Crucifixion and Resurrection.

The Antkeeper 1966 - Lutheran Church in America / 28m — Fred Gwynne narrates Rolf Forsberg’s allegory on the story of mankind, as represented by a gardener, his son, the wicked one, and a world populated by ants.

The Other Wise Man 1969 - Family Films / 29m — Henry Van Dyke’s classic tale of Artaban, a Persian believer who spends 33 years seeking the Christ child only to finally reach him at the time of the Crucifixion.

The Lord’s Ascension 1952 - Family Films / 12m — This is the final episode in the distinguished Family Films 26-episode The Living Bible series. It dramatizes events between the Crucifixion and Christ’s Ascension.

Part of the Gospel Films Archive series, The Easter Collection compiles a quartet of short Christian films (from various production houses active in the 1950s and '60s) centering on Jesus Christ's Crucifixion and Resurrection. "Dawn of Victory" (1966) is a straightforward dramatization of Christ's final hours and the ensuing confusion among followers after Jesus exits the tomb, covering the Crucifixion from the perspective of two secret followers, Nicodemus and Joseph of Arimathea. In the rushed 12-minute "The Lord's Ascension" (1952)—the final episode in Family Films' The Living Bible series—the imagery feels almost incidental to the narration concerning the period between Christ's Crucifixion and Ascension. Much better is the "The Other Wise Man" (1969), a touching account of a Persian who intended to join the three Magi in meeting the infant Jesus, but was thrown off course by his own kind act toward another; his adventures over the next 33 years in trying to see Jesus ends in a final, beautiful irony. The wild card in this collection is "The Antkeeper" (1966), writer-director Rolf Forsberg's surreal psychedelic allegorical tale (somewhat reminiscent of "bad trip" scenes from the era's B-movies) about an old man gardener who turns his son into an ant and sends him into the garden to deal with ants fighting amongst themselves (incidentally, Forsberg's 1964 "Parable"—another Christian allegory, this time set in a circus—was entered into the Library of Congress's National Film Registry in 2012). Recommended. 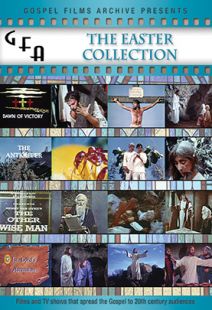