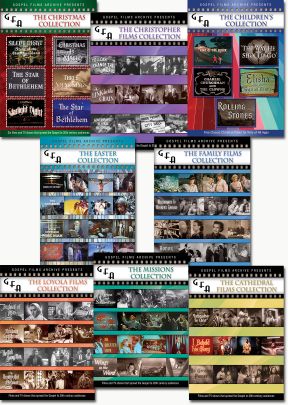 Missions Collection — The Gospel Films Archive is a multi-volume collection of rare and vintage Christian dramas and documentaries produced throughout the 20th century by independent Christian producers as well as major Hollywood studios. The GFA Missions Collection documents the profoundly important pioneer work of individuals and organizations in missionary fields worldwide.

Cathedral Films — James Friedrich, founder of Cathedral Films, was inspired to make films that would minister to the church. In 1936 Friedrich moved to Hollywood and met the talent that would become his collaborative team for many years, including veteran Hollywood director Irving Pichel. The Gospel Films Archive is a multi-volume collection of rare and vintage Christian movies produced in the 20th century by independent Christian producers as well as major Hollywood studios. These vintage movies demonstrate how the Christian message was communicated to 20th century audiences.

Christopher Films — The Gospel Films Archive is a multi-volume collection of rare and vintage Christian dramas and documentaries produced throughout the 20th century by independent Christian producers as well as major Hollywood studios. In 1945 Father James Keller, M.M., established a non-denominational Christian organization called The Christophers to be a positive influence and pro-active force in the post-war world. The Christopher Films were intended to foster political honesty, business integrity, and compassion for the sick and the poor, and to be generally relevant to all faiths.

The Christmas Collection — Silent Night: Story of the Christmas Carol: (1953) 13 min., color. Beautifully told true story of how Franz Gruber created the iconic 1818 Christmas carol; Christmas is Magic: (1953) 24 min. Robert Hutton plays a war vet with amnesia who is taken in by widow Frances Rafferty and her son on Christmas Eve.; Star of Bethlehem: (1956) 12 min., color. Story of the Nativity beautifully narrated from the Gospels and told using the silhouette animation style of Lotte Reiniger. The film opens with the Holy Family traveling to Bethlehem and closes with the Wise Men bearing rich gifts, while a host of angels descend from the heavens.; Three Young Kings
(1956) 28 min. Episode of “DuPont Theater.” In Latin America three young boys follow a village tradition of carrying Christmas gifts to the mission church children in the costumes of the Three Wise Men. When they ride through the poor section of town, the boys decide to give the presents to the ragged children instead, causing a crisis in conscience in the community over the true meaning of giving.; Star of Bethlehem: (1954) 26 min. Produced, directed by and starring James Mason, with the participation of his wife, daughter Portland and other child actors. Mason and his wife first read sections from the bible that lead up to the birth of Jesus. He visits his daughter in bed and their discussion leads into an enactment of the Nativity starring a cast of children. Jerry Mathers plays Joseph. A heartfelt, inventive and personal religious project by a Hollywood star at the height of his fame.; Starlight Night: (1939) 30 min. Opulent British docu-drama about the creation of the famous Christmas carol centers on a stern father estranged from his daughter.

The Easter Collection — Gospel Films Archive proudly presents a festival of four rare classic short films that celebrate the spirit of Easter as manifested by Christ's Crucifixion and Resurrection. Dawn of Victory 1966 - Concordia Films / 29m — Nicodemus and Joseph of Arimathea witness the prophesies of Isaiah come to pass during this dramatization of Christ’s Crucifixion and Resurrection. The Antkeeper 1966 - Lutheran Church in America / 28m — Fred Gwynne narrates Rolf Forsberg’s allegory on the story of mankind, as represented by a gardener, his son, the wicked one, and a world populated by ants. The Other Wise Man 1969 - Family Films / 29m — Henry Van Dyke’s classic tale of Artaban, a Persian believer who spends 33 years seeking the Christ child only to finally reach him at the time of the Crucifixion. The Lord’s Ascension 1952 - Family Films / 12m — This is the final episode in the distinguished Family Films 26-episode The Living Bible series. It dramatizes events between the Crucifixion and Christ’s Ascension.

The Children's Collection — King of the Block 1956 - Family Films / 14m, Steve has a new treehouse to share with friends, but only if they do what he says. Dad and son each discover how selfishness can impact friendships. The Way He Should Go 1954 - Concordia Films / 26m, Young Freddie Fisher has been raised with strong Christian values that are tested when he acquires stolen model train signals. Charlie Churchman and the Clowns 1968 - Family films / 19m, Charlie uses satire and slapstick comedy to get people into church fellowship. When the circus arrives, Charlie sets out to "get those clowns to church." Elisha & the Syrian Army 1957 - Moody Bible Institute / 13m, When Gary indicates a fear of going camping, Mr. Fixit tells him the Bible story of how Elisha showed no fear of the Syrian King, and thereby won a great victory. Rolling Stones 1950 - Family Films / 30m, The Stones are a roving trailer family. Mom and young son Bobby yearn for a permanent home. Can an old church caretaker restrain dad's wanderlust.